Your party isn’t winning me over. Yes, I know you’re not party leadership and they listen to you about as well the Republican leadership listens to us. But it’s still your party, and I want to talk with you a moment.

I know many of you outside the city limits feel the same as I. Most of us weren’t happy with Trump, but Trump was no Hillary, and that’s how he won the election. You know that. I know many of you who could have voted stayed home on November 8th, and I saw your happy faces all day on November 9th not because Trump won, but because Hillary lost. That’s why most of us were happy, too. I know you were just as disgusted with the protests: I heard one self-avowed liberal call them “a bunch of spoiled brats,” and I know he wasn’t the only one who thought that. Truth be know, there’s less difference between you and I than there is between you and those in the big cities, or party leadership.

I know these things because I used to be a Democrat. And if a person could go from the Democrats to the Republicans, a person can go in the other direction. I left when I felt the party left me, which most of you are feeling and have felt for some time. I could go back, because the Republican leadership is just as deaf to its membership as yours – if the Democrats wanted us. Unfortunately, I’m not getting that. I didn’t get it in the run-up to the election, and I’m certainly not getting that now.

You probably know where this is going. Your party – and the established order in ours – has opposed the results of the 2016 election all they could. For a quick refresher, here’s a map of the areas that voted against Hillary: 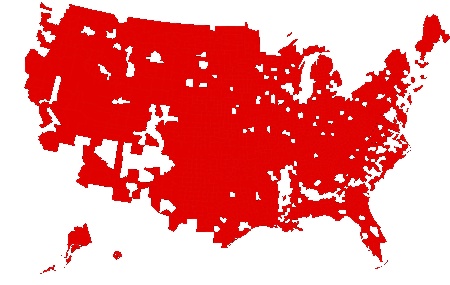 They have, of course, demeaned we who live here. Long ago they threw us under the bus. Their highest priority is maintaining the power of their leadership. There is no better indicator of this than how they did a 180° turn on Comey the moment Trump fired him.

Most of us put the well-being of our country first, because we are the country and know that the power to govern rests with each citizen, not with party leadership. That idea is so alien to them that it’s beyond their comprehension. Simply put, they are not the party of most of the country, and from the way they act, they don’t care that they aren’t.

What? No, I’m not trying to recruit Republicans. If there was a significant difference between the two I would, but there isn’t. The Republicans are all talk and no walk, because our leadership has become just as enamored with the status quo as yours. All I’m asking is for you to take a hard look at your party and to ask yourself if this is what you want.

If it is, fine. That’s your choice and I’ll not try to change your mind. If not, why are you putting up with it? Yes, I know the feeling of “nothing we can do.” I’ve had moments of that myself. But there is, and best of all it’s 100% legal.

You support those who support your interests, and oppose those who oppose yours. This goes beyond politicians to businesses because the money we spend with them ultimately goes to the causes they support. If it’s the media, in most cases they’re going to be opposed to us and our values, anyway, so why give them our money?

Likely you’ve heard it all before, but that doesn’t make it any less true. It does require vigilance on our part, because someone who supports our interests now may not continue to do so. In that case it’s vote the rascal out and repeat as needed.

That is sometimes easier said than done, particularly if we’re in a district where most do not share our values. But it takes work, including campaigning for a candidate. Yes, I know that flies against our nature, but think of it like your sewer line backing up: an unpleasant job, but ignoring it will make it worse.

It goes without saying that this is done from local elections on up, or you’ll have the entrenched party interests opposing your politician’s every move, just as they are right now with Trump. But even big trees depend on small roots, and if you get enough people who think like you into the lower levels of the party, it will push out the entrenched party-for-the-sake-of-power interests.

You should know there is one thing more unpleasant: You might have to run for office. Yeah, most of us wouldn’t want that kind of job, and some of us (myself especially) just don’t have the people skills. But you might. You’ll have the media against you, but that doesn’t mean as much as it once did. You’ll just have to do an end-run to get your message out, which is easier today than in times past.

In other words, if you party isn’t what you want it to be, deal with it one election at a time, from local offices on up. If you like your party as it is now, just sit back and enjoy. But that’s not what I’m hearing from a lot of Democrats.

Change isn’t easy. If you decide to make the Democrats truly your party,  you will have a long, hard, road ahead. There will be failures. Many failures. But there will also be successes. It’s your party; if you don’t like it, change it.

Now, if we can get the Republicans to do likewise.